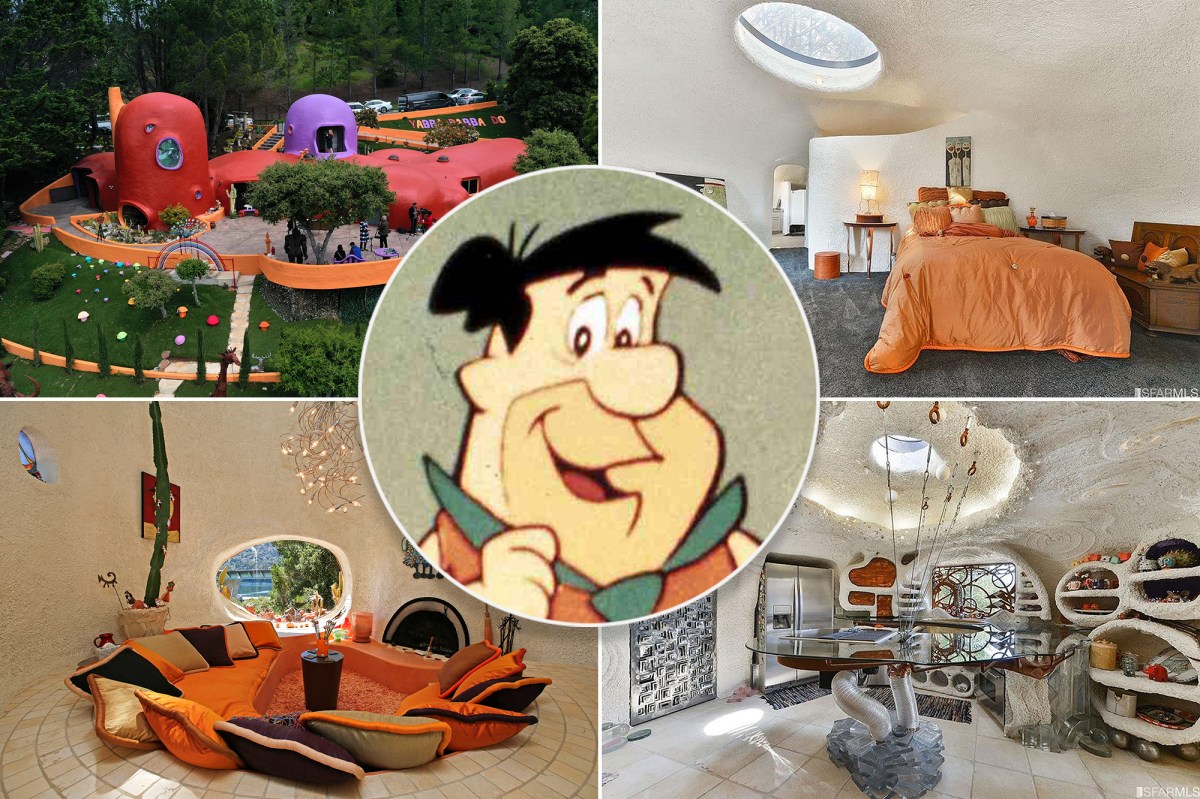 The 1960s cartoon “The Flintstones” brought a prehistoric twist to suburban living in the town of Bedrock — but the antediluvian design has not intermingled as seamlessly in Hillsborough, California.

The town must pay $125,000 in a settlement with an eccentric homeowner who claims the suburban town tried to “intimidate, threaten and coerce” her into subduing the look of “The Flintstone House,” according to her lawsuit and the settlement agreement obtained by The Post.

The 2,700-square-foot “Flintstone house,” built in 1976, is made of six aeronautical balloons encapsulated in wire mesh and covered in concrete, according to a 2019 Guardian feature.

Multimillionaire businesswoman Florence Fang purchased the distinctive home, located outside San Francisco, in 2017 for $2.8 million and began to accentuate the home’s prehistoric theme with a large “Yabba Dabba Do” sign, dinosaur statues and multicolored mushrooms outside the home, according to her 2019 lawsuit.

“I was watching ‘The Flintstones,’ and the first episode is Fred with Dino… And I said, ‘Dino should be here! Fred should be here!’ ” publishing magnate Fang told the Guardian, calling the home her “happy place.” The almost 90-year-old woman also owns two conventional-looking properties on the street with a combined value of $5.3 million, according to local property records.

But an inspector held that her garden of sculptures exceeded 10,000 square feet (which was disputed by each party) and would require a permit. Fang maintained that the municipal codes and ordinances do not require permits for statues and yard art, according to the complaint.

Over the next three years, Fang was also asked to get approval for new wall colors by providing a paint chip sample; to plant shrubs at the end of the turf to soften it; and to provide “justification for” or “elimination of” 1-foot-tall sculpture replicas of Chinese terracotta guardians “to protect her home, like saints,” Fang’s lawsuit said.

Fang, who is of Chinese descent, filed a countersuit for discrimination, in part because of racially charged statements allegedly made by the inspector involved, according to the lawsuit.

“I just wanted my peaceful life. I’m a very, very regular, retired old lady… But of course, a little different,” she told the Guardian. “I have all kinds of dreams.” Fang is the former owner of the San Francisco Examiner and AsianWeek, and she is attributed with being the first Asian American to own a major daily newspaper in the US.

“The residence known as the ‘Flintstone House’ continues to garner worldwide attention and emotional reactions that often miss the core problem – the property owner has constructed a large project without design review or first applying for required building permits,” the town of Hillsborough wrote in an April 2019 press release.

Both parties have agreed to sign a release to dismiss claims. Fang will be allowed to keep alterations and will work out retroactive permits and inspections with the town, according to the settlement agreement.

“The Parties have reached an amicable resolution of the case to the satisfaction of all the parties, such that the improvements made to the Flintstone House will be permitted to remain,” reads the press statement signed by all parties in the settlement.

The Post reached out to lawyers on both sides of the case, but the settlement agreement did not permit them to make further comments.

Four decades of “Yabba Dabba Do”

The house, which was not originally designed to resemble “The Flintstones” house (but was nicknamed by neighbors by the 1990s), has been a local point of contention since it was built in 1976 by organic architecture proponent William Nicholson.

Previous owners of the unusual house, Tom Petika and his wife Dorothy, told SFGate in 1997 that one neighbor wanted to buy and bulldoze it.

“So he helped create [an] architectural review board, so there would never ever be another home like that built in Hillsborough,” he told SFGate. The Post could not independently verify the origins of the Architectural Review Board.

The originally off-white house became even more noticeable when previous owners painted it orange in 2000, according to Atlas Obscura. The kitchen was remodeled by Bay Area architect Eugene Tsui, according to the listing. Before Fang purchased the home, it was an Airbnb, SFGate reported at the time.

Even before Fang began adding sculptures to the yard, the city planner allegedly offered to get all of the necessary permits for the then-new owner to demolish the house, according to the lawsuit.

“Mrs. Fang immediately rejected the offer and told [the planner] she intended to make the Flintstone House really the ‘Flintstone House,’ ” said the lawsuit.

The house has three bedrooms, two bathrooms, a biological kitchen, a conversation pit, a game room and a loft. It has views of the Crystal Springs Reservoir, according to the listing.

Nearby Palo Alto has previously been in the news for its strict zoning standards, even showing down against Facebook founder Mark Zuckerberg, whose home permit applications were denied by the town.

An inspector said she needed a permit if the garden installation exceeded 10,000 square feet or the size of the yard was disputed by each party, and Fang maintained that the municipal codes and ordinances do not require permits for a statue or yard art. 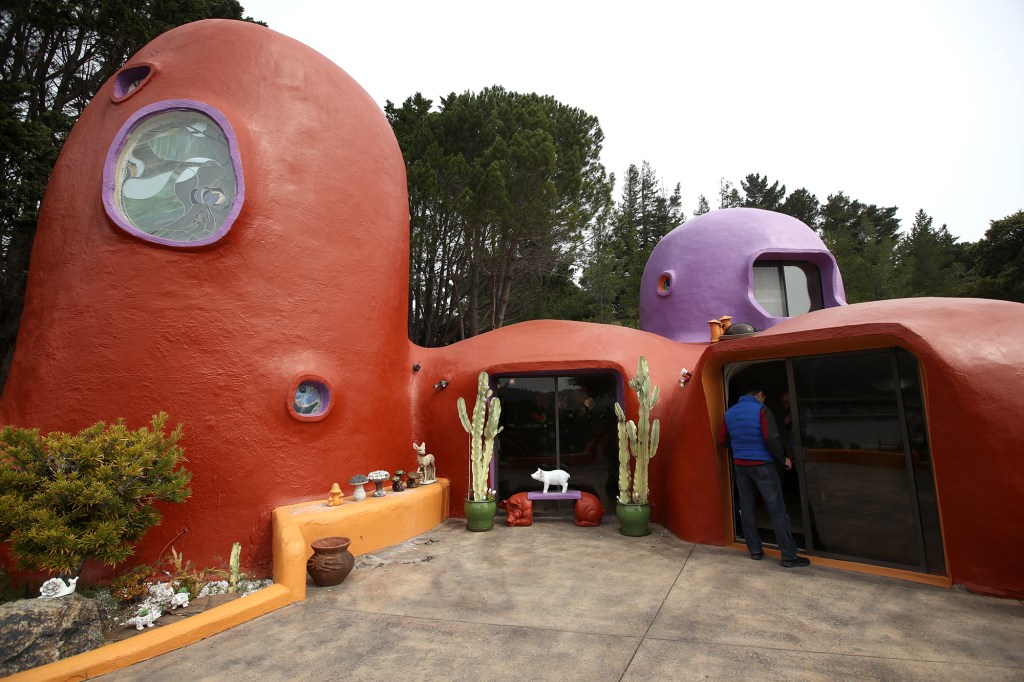 The 2,700-square-foot “Flintstone” house, built in 1976, is made of aeronautical balloons encapsulated in wire mesh and covered in concrete. The effect is six unique domes with up to 30-foot ceilings. 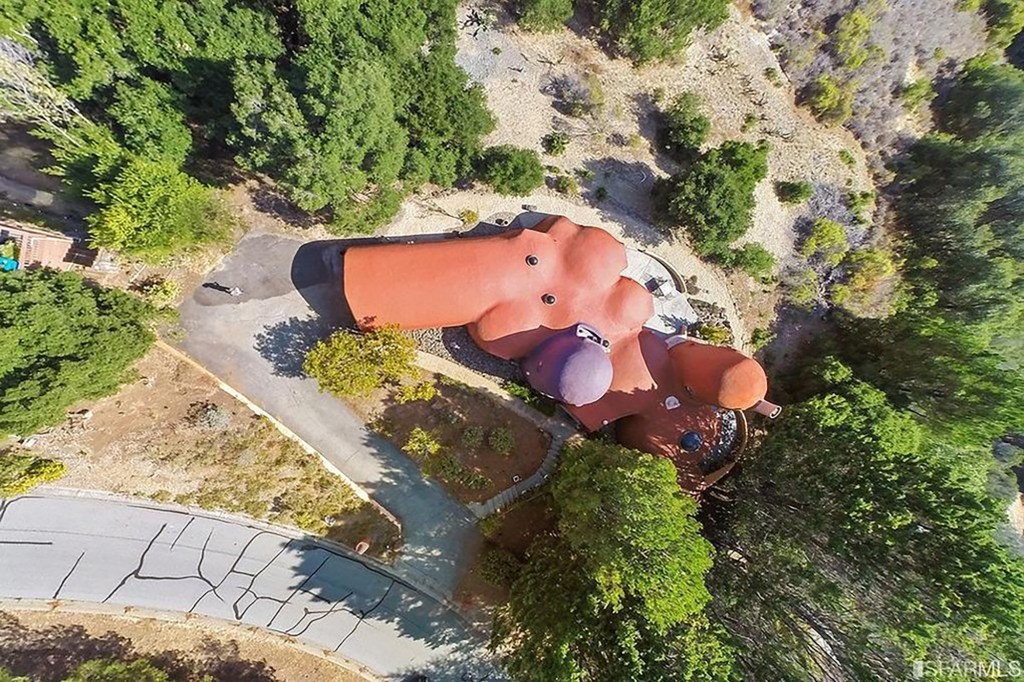 The plot spans almost two acres on a dead-end road. 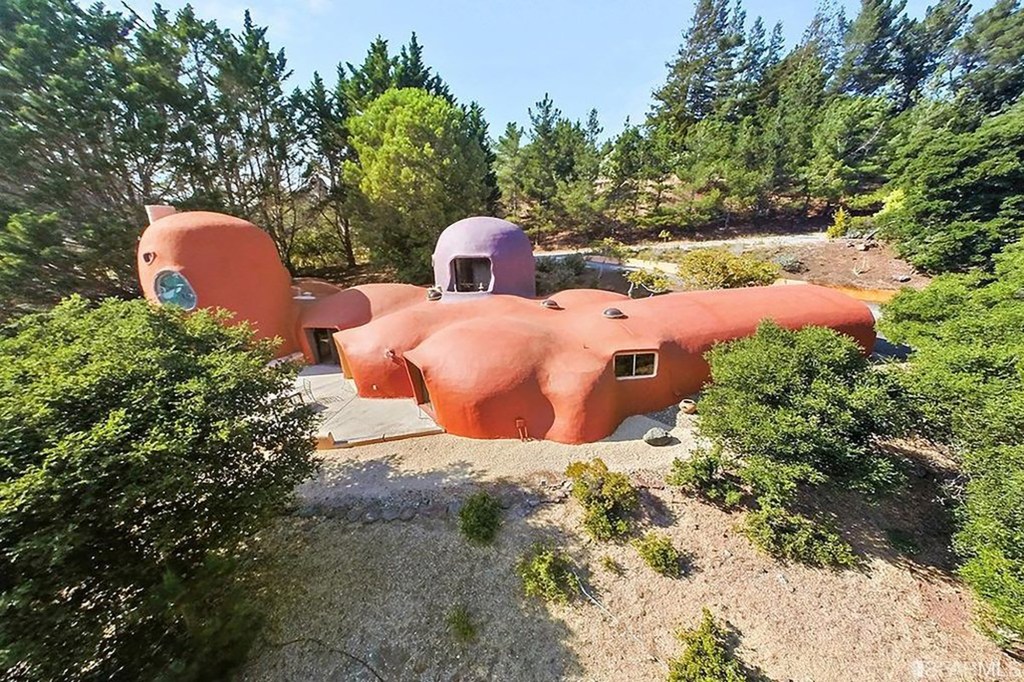 The almost 90-year-old homeowner also owns two conventional-looking properties on the street with a combined value of $5.3 million, according to local property records. 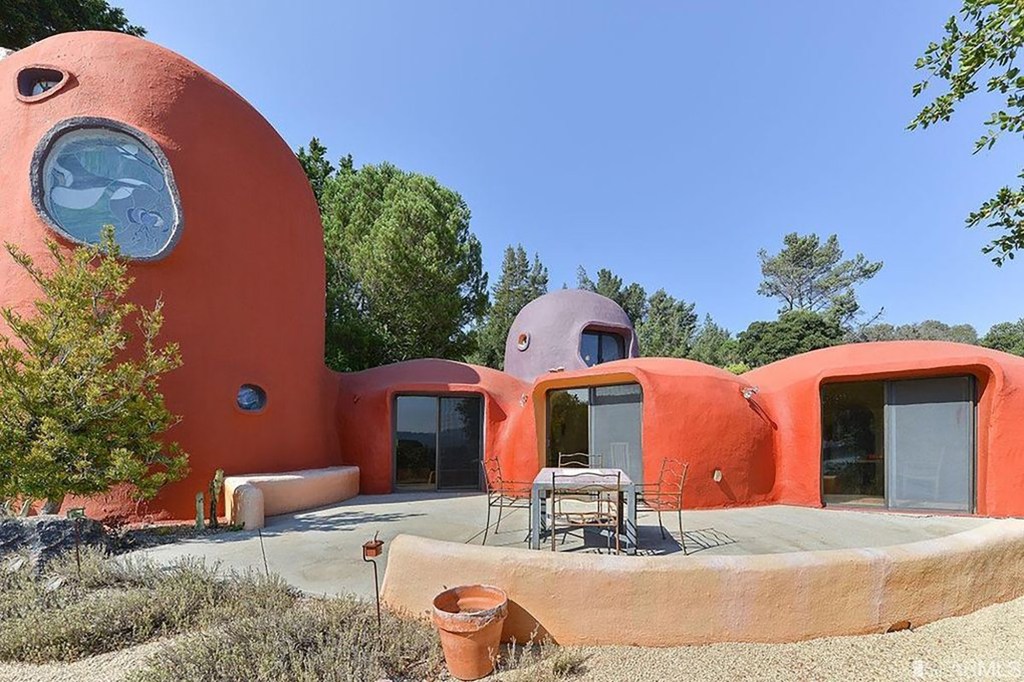 An exterior view of the home. 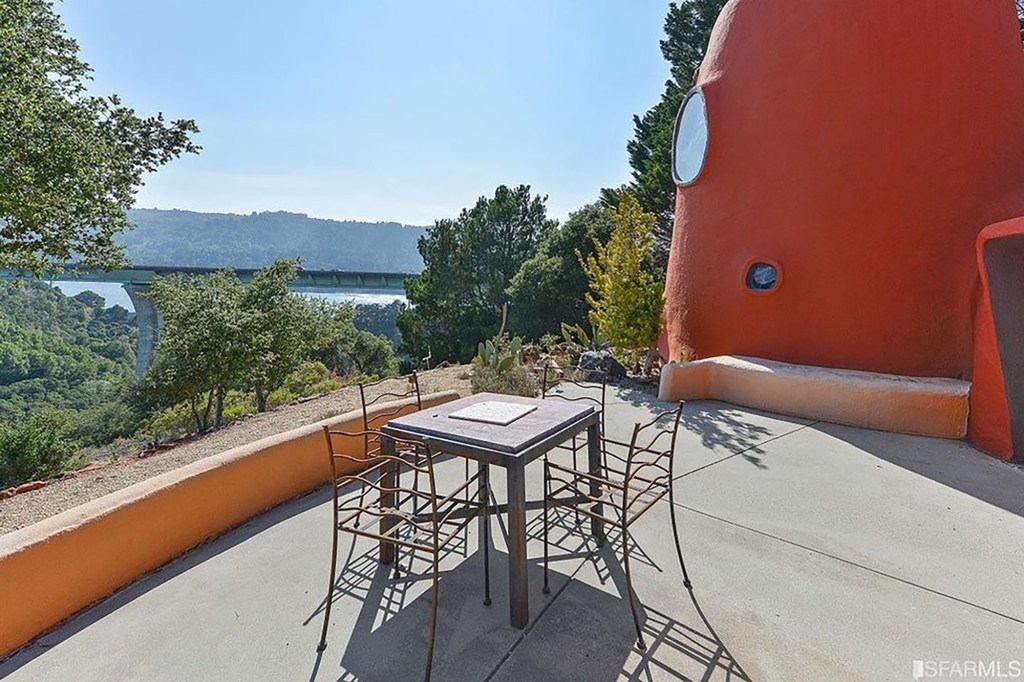 The backyard deck is included in “other improvements” for which Fang will provide a building permit application, according to the settlement.

Both parties have agreed to sign a release to dismiss claims. The owner will be allowed to keep alterations and will work out retroactive permits and inspections with the town with permitting fees waived, according to the settlement agreement obtained by The Post. 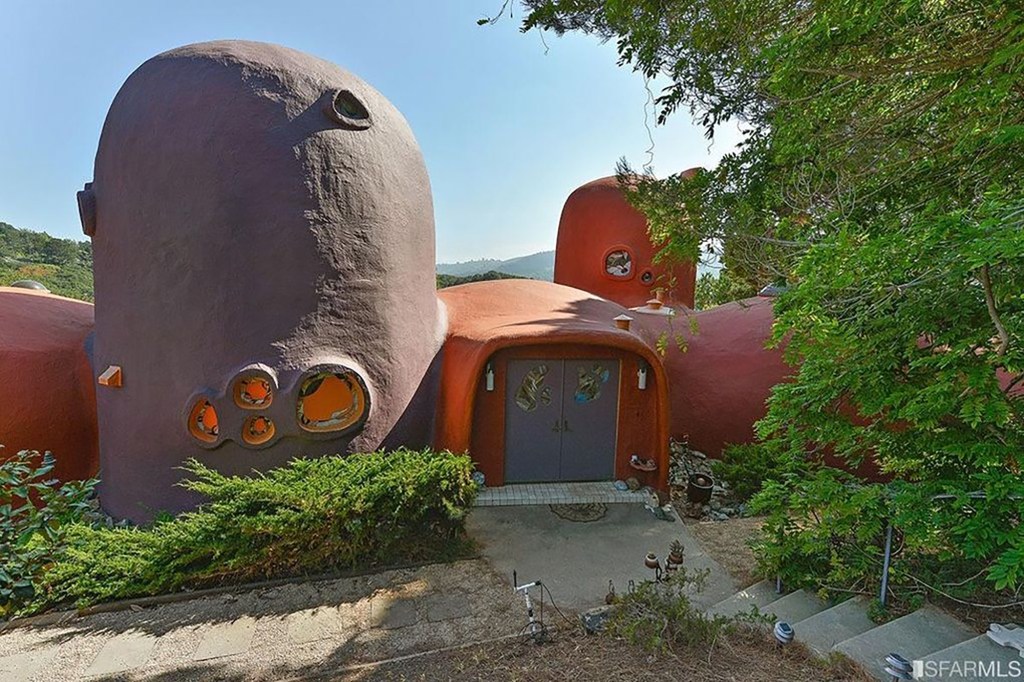 “The Parties have reached an amicable resolution of the case to the satisfaction of all the parties, such that the improvements made to the Flintstone House will be permitted to remain,” reads the press statement signed by all parties in the settlement.

Since leaving office in January, sales of former President Donald…