August’s best photography through a new lens: Our intern 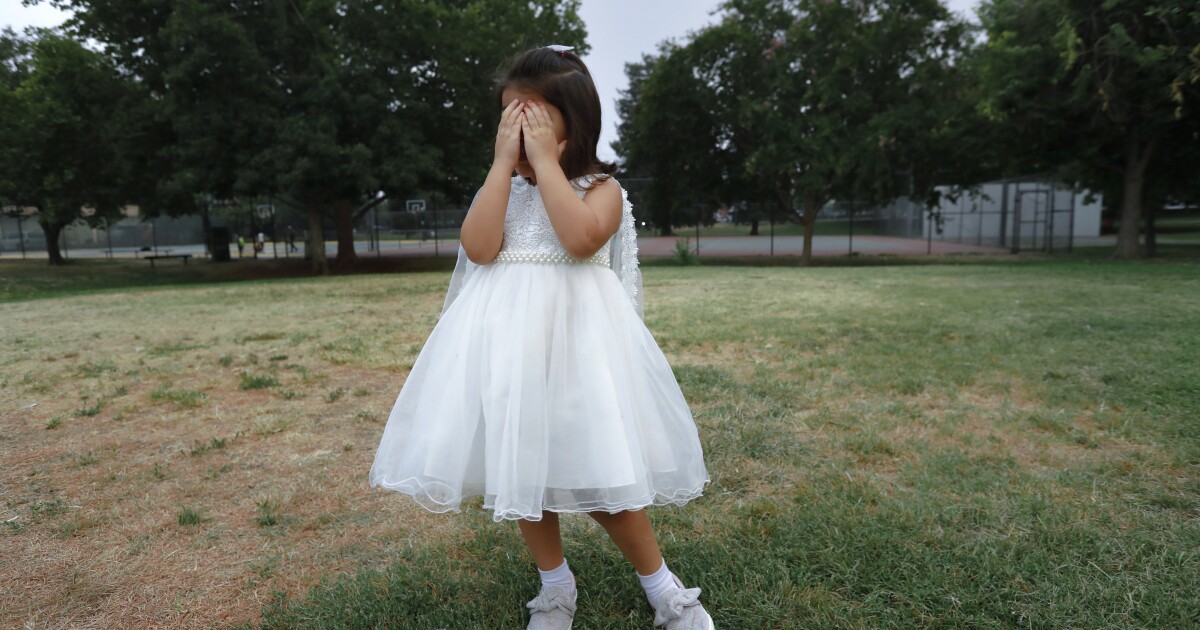 A quiet moment of fatherhood on a newly accessible beach, isolated from the city bustle. A visit with a soon-to-be mother turned into a family’s first portrait. A doctor’s moment of calm, when beauty in a COVID-19-filled hospital is hard to find. A grave international crisis that doesn’t acknowledge geographic or diplomatic borders.

Photography by Times staff photojournalists can reveal not only the world they are seeing but also who they are. In this month’s review that I curated, 15 staff members offer images that give readers a view of America and the world.

This collection presents an intimate perspective from visual storytellers — motivated by the news breaking around them. For the past few weeks, they’ve documented raging fires, Olympic history and stunning portraits of people who may look familiar.

As a photo editing intern, I see these images for their glory but I also understand the journeys necessary to arrive at these slivers of history. The photographs, which are accompanied by my own notes, also appear in print and online across this month’s coverage. Just a warning: Graphic content follows.

Centering on the experiences of Inez Salinas and her daughter River, photojournalist Gina Ferazzi set out to reveal the reality of life for the roughly 50,000 people who were displaced by the Camp fire in 2018. This scene, my favorite moment from the series, shows how layered this situation is. Readers are reminded of the tender moments occurring amid lives upended. Ferazzi focuses our attention on the love first and the harsh situation second.

Why set up a studio backdrop when you plan on showing the setup in the final photo? For me, this visual tool creates a feeling that viewers are getting an inside look at the person being photographed. This portrait, made by photojournalist Mariah Tauger, pairs perfectly with the article’s headline: “Sarah Paulson has regrets about playing Linda Tripp. But she’s not ready to let her go.” The lighting itself, assisted by photojournalist and photo editor Ricardo DeArtanha, the pose, the expression and the inclusion of Paulson’s dog creates a feeling of intentionality and gives a regal tone.

Laurel Hubbard was catapulted to worldwide acclaim when she became the first openly transgender athlete to compete in the Olympics. This photograph, by photojournalist Wally Skalij alludes to a feeling of release. “Sport is something that all the people around the world can do,” Hubbard, 43, said. “It’s inclusive, it’s accessible and I think that’s just, just really fabulous.”

Dr. Anita Sircar, pictured above by photojournalist Francine Orr, is an infectious-disease physician and clinical instructor of health sciences at the UCLA School of Medicine. Here is an excerpt from her Op-Ed “As a doctor in a COVID unit, I’m running out of compassion for the unvaccinated. Get the shot.”

“The burden of this pandemic now rests on the shoulders of the unvaccinated. On those who are eligible to get vaccinated but choose not to, a decision they defend by declaring, ‘Vaccination is a deeply personal choice.’ But perhaps never in history has anyone’s personal choice affected the world as a whole as it does right now,” she wrote.

This photograph, made by photojournalist Al Seib, draws attention to the eyes, as many powerful images do. You can feel the weight of the young boy’s emotion through his clinging gesture and distraught expression. When I saw August’s face, among other children’s faces, I sensed the weight of the pandemic and the anxiety caused by the search for normalcy.

Since the end of 2019, when hundreds of gray whales inexplicably began to die by the scores along the Pacific coast, photojournalist Carolyn Cole began investigating and documenting the issue. In her collaborative project with staff writer Susanne Rust, she made thousands of photos. To me, this image stands out because it brings us closer to these giant animals and humanizes them. Sure, it’s a huge wonder to see the scale of the whales, but the eye draws us in.

Imagery of fires has heavily permeated The Times’ summer coverage. But when I began to unpack the pictures I’ve culled through myself and the images I’ve seen across the paper, photojournalist Mel Melcon’s picture, above, immediately sprang to mind. Although this frame doesn’t directly show any flames or destruction, the facial expressions, the state of the dogs, the smoky color caste and the men’s backstories put viewers in the scene.

Photojournalist and foreign correspondent Marcus Yam has been photographing and reporting on the U.S withdrawal from Afghanistan, the bombing outside Kabul’s airport and the ongoing uncertainty of the Taliban’s takeover since earlier this month. On Aug. 26, I worked with photo editor Keith Bedford to select which of Yam’s images would be on the front page for the Aug. 27 print edition. These three images, above and below, are a minuscule sample of Yam’s powerful, jarring photographs permanently recording the reality of the situation.

Not long after this picture was made, staff writers Nabih Bulos and Laura King published a story about the unceremonious end to America’s longest war. Here is an excerpt:

“With the roar of a U.S. military cargo plane lumbering into the night sky over Afghanistan’s Taliban-held capital, the last U.S. troops departed the country at almost the stroke of midnight Monday, ending America’s longest war and leaving lasting but disparate wounds that cut across two nations.

The momentous final scenes played out in darkness.”