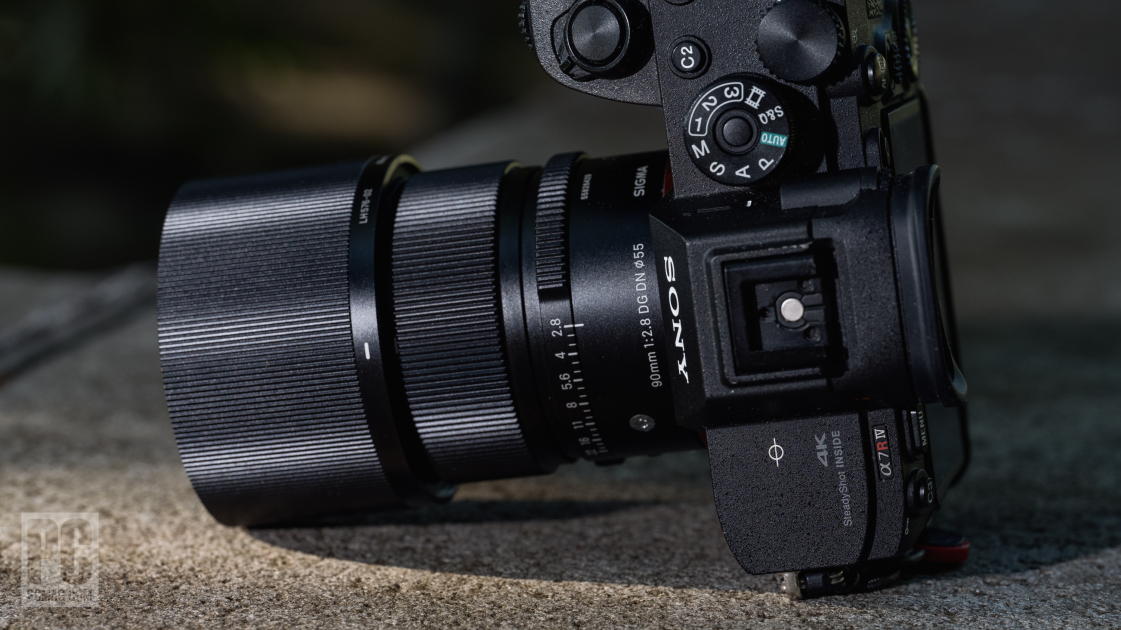 The Sigma 90mm F2.8 DG DN Contemporary ($639) is another entry in the I Series, a family of compact, metal-barrel lenses for full-frame mirrorless cameras. Like others in the family, the 90mm F2.8 is made for photographers who want to pack small, lightweight kits, prefer fixed focal views to zoom, and appreciate on-lens aperture control. It’s missing the extensive weather protection that Sigma puts in some of its other prime lenses, and doesn’t gather as much light as peers like Sony’s similarly affordable FE 85mm F1.8 or Panasonic Lumix S 85mm F1.8, but if you’re in love with the look and feel of the I Series, those lenses won’t do the trick.

Aluminum Construction for an Old-School Feel

The 90mm F2.8 follows the I Series design playbook closely. It’s a short, squat lens, one that may be mistaken for vintage at a distance thanks to its piano black, anodized aluminum construction. It measures about 2.4 by 2.5 inches (HD) and weighs 10.4 ounces, balancing well on most full-frame mirrorless cameras.

Sigma offers the lens for Sony E cameras, as well as L-mount bodies from Leica, Panasonic, and Sigma. You’ll need to make sure you buy the right version for your camera, as L and E systems aren’t cross-compatible. Despite its slim build, the 90mm is made for the full-frame sensor size. It’s usable on APS-C models too, but you’ll get photos with a narrower angle of view, a consequence of attaching the lens to a camera with a smaller imaging area.

You get the front and rear caps with the lens. Sigma also includes a soft carrying case, a lens hood, and an upscale magnetic snap-on cap. The magnetic cap is clever, but is a little tricky to pry off if you’re using the hood. It also prevents you from using filters—the lens has a 55mm thread. A standard center-pinch plastic cap is included, too—it’s not as pretty as the magnetic one, but is more practical.

On-lens controls are pretty basic. The manual focus ring takes up much of the surface area—its knurled ridges make it easy to find by touch. There’s enough separation between it and the aperture control ring to stop you from turning both together by accident. A toggle switch on the side swaps between auto and manual focus.

Dust and splash protection are limited to a rubber gasket at the lens mount, something to consider if you’re pairing the lens with a weather-sealed camera, and especially if you’re an outdoor photographer. I wouldn’t hesitate to use the lens under gray skies and light drizzle, but that’s the extent of the sealing.

The aperture ring turns comfortably, clicking into place at third-stop increments from f/2.8 down to f/22. There’s also an A position, useful if you wish to move control to the control dials on your camera, or if you simply want it to be handled automatically when working in an automatic or shutter priority mode.

There’s no way to make the ring turn smoothly without click-stops, though, a downside for cinematography. If it’s a must-have feature, consider the premium Sony FE 85mm F1.4 GM as an alternative, though it’s a much bigger lens, and its $1,800 price puts it out of the reach of budget-minded shutterbugs.

Autofocus is driven by a stepping motor (STM), a common choice for small, lightweight primes. The motor drives focus smoothly and quietly, but isn’t quite instant on our Sony a7R IV test camera. The lens drives from its near focus distance to infinity in about a third of a second—you may wait a beat before initial focus acquisition in some situations.

Focus speed is fast enough for portraits and other one-off shots. It’s on the slow side for action, so don’t look to this one as a lens to snap shots of sports that lend themselves to the focal length, like capturing basketball from the baseline. The Sony FE 85mm F1.8 is a better fit there—its brighter aperture is a superior fit for gymnasium lighting, and dual linear motors track movement with more aggression.

Manual focus is an option, too. It’s a very pleasing experience for photography—the focus ring turns with some resistance, and ramps its response depending on how quickly you turn it. A quick twist shifts focus dramatically, while slower, deliberate adjustments are used to set fine focus. When coupled with in-camera focus aids, it’s not difficult at all to set focus manually.

Videographers won’t be as happy to hear about the ramped focus response. Lenses that respond linearly—adjusting focus based on how many degrees you twist the ring, not how quickly you turn it—are more desirable for video. On the plus side, focus breathing, the effect where the angle of view blooms or shrinks along with the focus point, is absent. You can freely use the lens for video shots that rack focus from one point to another without worry.

Close-up focus is available to 19.7 inches, good enough for a decent 1:5 macro rating at the nearest focus point. It’s better than you get with brighter lenses—the Sony FE 85mm F1.8 is limited to 1:8.3 macro capture. If macro is what you’re after, the Sigma 105mm F2.8 DG DN Macro Art is our favorite in the class—it’s a bigger lens, but focuses closer to capture objects at life-size 1:1 magnification.

Like many small primes, the 90mm Contemporary doesn’t include any sort of optical stabilization. It’s less of an issue with mirrorless systems—most E-mount and L-mount models include image sensor stabilization, so any attached lens benefits.

I tested the 90mm F2.8 DG DN Contemporary along with the 60MP Sony a7R IV and software from Imatest. Short telephoto lenses are, almost as if by rule, very sharp optics. This 90mm is no exception, netting resolution considered excellent for the camera (4,600 lines) wide open, and getting just a bit better at f/4 (4,800 lines). Contrast holds steady through f/11, with the expected diffraction-infused drop in clarity setting in at f/16.

In-camera corrections are applied when working in JPG mode, but Raw photographers will note some visible pincushion distortion in photos, as well as a slight vignette when working at f/2.8. We reviewed the lens ahead of its announcement, but it’s only a matter of time before Adobe adds a profile to Lightroom for automatic correction.

See How We Test Cameras and Lenses

The 90mm focal length draws images with a naturally shallow depth of field, making it a good fit for portrait work. The quality of the background blur (the bokeh) is quite good here. I was able to spot just a hint of false color (LoCa) in the areas of transition between focus and blur, but only when I went looking for it. Highlights show a slight cat’s eye effect near the edges of your frame when working at f/2.8, but the rounded aperture blades net near perfect circles when stopped down to f/4.

Small and Sharp, But Slower to Focus

There’s little doubt that Sigma’s design team took inspiration from vintage lenses when it comes to the I Series. Like its siblings, the 90mm F2.8 DG DN Contemporary has the look and feel of a vintage lens, a feature unto itself for photographers who have a certain affectation for their gear.

Image quality is simply exquisite. Photos are tack sharp at the plane of focus, and give way to soft, blurred backgrounds. You’ll miss out on a few creature comforts of more modern-looking lenses, though. Dust and splash protection aren’t as strong as other options for E and L cameras, and autofocus can struggle to keep up subjects moving toward and away from camera at speed.

L-mount system owners don’t have as vast a library of optics as Sony, and we’ve not yet tested Panasonic’s recent Lumix S 85mm F1.8, but its linear focus drive should net a bit quicker response.

Both Sony and Panasonic’s options skip on-lens aperture, and make no attempt to match the I Series aesthetics. So if you love the way the I Series looks and feels, and are more concerned about image quality and portraiture than action photography, the 90mm F2.8 DG DN Contemporary is worth your time.

Sign up for Lab Report to get the latest reviews and top product advice delivered right to your inbox.

This newsletter may contain advertising, deals, or affiliate links. Subscribing to a newsletter indicates your consent to our Terms of Use and Privacy Policy. You may unsubscribe from the newsletters at any time.