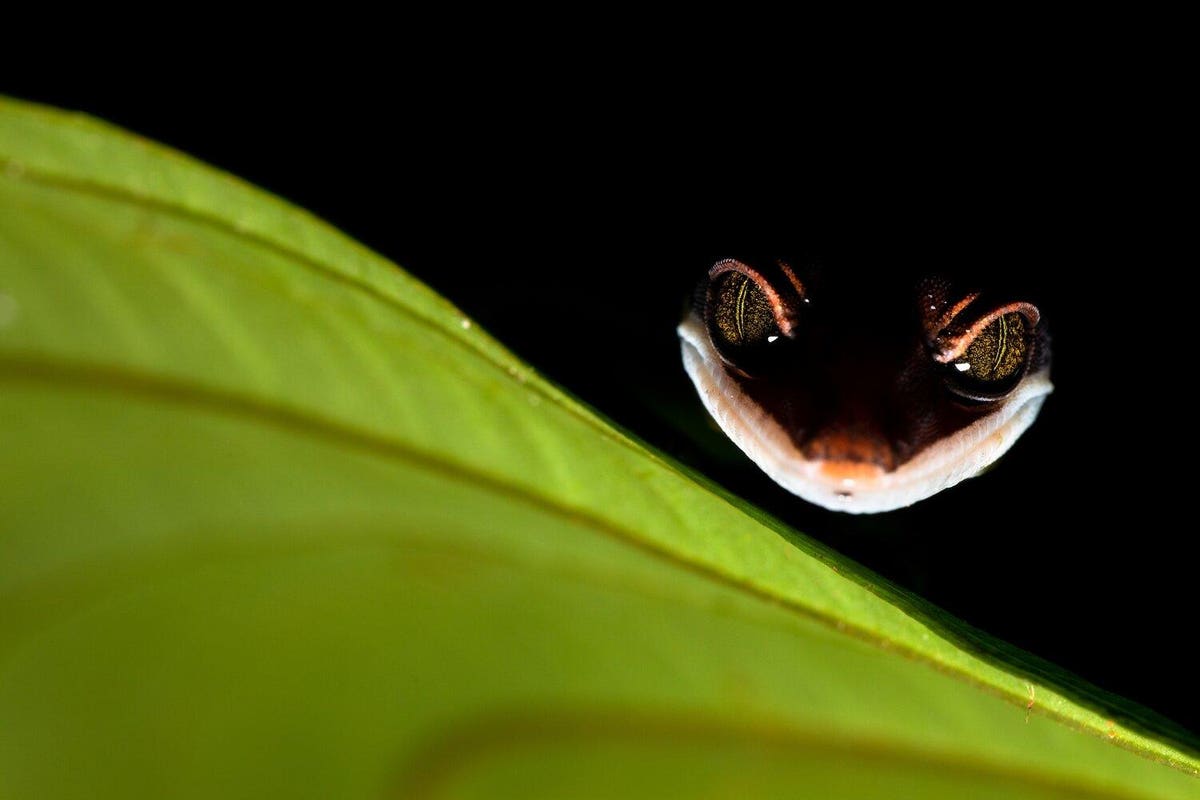 For its second year and with more than 6,500 photos from 52 countries in competition, the Close-up Photographer of the Year (CUPOTY) organization, devoted to close-up, macro- and micro-photos, has announced its remarkable winning images.

The annual photography competition gave the first prize of £2,500 and the CUPOTY trophy to a nighttime shot of an eel larva spotted off the island of Lembeh, Indonesia, by Galice Hoarau, a French photographer and professor of marine molecular ecology.

“Peering through the darkness with your flashlight can be stressful the first time you do it, but it gets fascinating quickly,” explains the photographer. “What makes blackwater diving so magical is the abundance of rarely-seen planktonic creatures you spot as they take part in one of the largest daily migrations of any animal on Earth. After sunset, small pelagic animals (like this larva) rise close to the surface to feed where the sunlight has allowed planktonic algae to grow. At sunrise, they dive into the depths and stay there during the day to escape predators.”

This year’s contest selected finalists in seven categories: Animals, Insects, Plants & Fungi, Intimate Landscape, Man-made World and Micro (for images created using a microscope), plus Young Close-up Photographer of the Year, for entrants aged 17 or under.

MORE FROM FORBESThe Best Photos Of Wildlife From Above: Stunning Winners Of Drone Awards 2020By Cecilia Rodriguez

Founded in 2018 by photographic journalists Tracy and Dan Calder, Close-up Photographer of the Year is an annual competition organized in association with Affinity Photo to encourage photographers to slow down, enjoy their craft, and make long-lasting connections with the world around them.

‘The standard was incredible,” said Tracy Calder, co-founder of CUPOTY. “Yet again, entrants have shown that close-up photography can help us see the world anew and discover beauty in subjects that are often overlooked.”

The Top 100 entries can be viewed here.

‘This common toad (Bufo bufo) took a liking to me, probably because I looked like a frogman myself,” the photographer jokes. “He didn’t stop following me during my two-hour dive in the Buèges karst spring (Hérault, Occitanie, France), so he became the perfect model.”

Mike Curry won the Insects category with his shot of a butterfly surrounded by peeling paint. ‘The juxtaposition of manmade decay and natural beauty works beautifully here,” said competition judge Ross Hoddinott. “The texture and pattern of the blistered paint creates a compelling close-up on its own, but the addition of the butterfly’s natural beauty and delicacy is a masterstroke.”

“Bioluminescence is abundant in the Bornean rainforest at night, a feature that becomes evident as soon as you turn off your headlamp,” said photographer Chien C. Lee of the photo above. “But few organisms emit a light as strong as Lamprigera beetles. Close relatives of fireflies, Lamprigera differ in that the females are wingless and produce a bright and steady greenish light from the tip of their abdomen. During a night walk in the mountains of southern Sarawak, I found this large specimen crawling through low vegetation, presumably on the hunt for snails, their preferred prey.”

Winner of the Plants & Fungi category, Elizabeth Kazda’s ‘Mandala with Miniature Tulips’ intends “to create art that challenges the viewer to look at the natural world with fresh eyes.”

“I collected some miniature tulips from my garden and placed them on a lightbox,” she said. “The vivid yellow centers were so striking that I decided to create a composition that would show both a side view and a center view of the plants.”

Second Place in the Plants and Fungi category, the image was taken in a woodland in Buckinghamshire, England. “It shows a line of 2.5mm high, fruiting bodies of the slime mold Metatrichia floriformis growing on a decaying beech trunk,” explains the photographer. “I liked this group because it showed different stages in their development. But when I looked through the magnifier, I noticed that the fruiting bodies resembled people standing in a line – the holes in the stems looked like little legs!”

Third Place in the Plants and Fungi category: “‘Almost every year, in early spring, I visit a place in Austria where one of the early bloomers – the dog’s tooth violet (Erythronium dens-canis) – grows,” said Henrik Spranz. “To ensure the best light, I get there early. But this means that the blooms of the violets are still closed. To my mind they look even more delicate and special in this state.”

Mark James Ford trekked across a baking lava field in Hawaii, with heat rising from every crack, to create his image of lava flow setting – securing top spot in the Intimate Landscape category.

At an old, abandoned mill by a pond, near the photographer’s home, water flows down the mountain into a giant cauldron and during winter it creates huge icicles. Above, a frozen air bubble inside an icicle.

In the Manmade World category, Kym Cox took the title with her study of the life cycle of a soap bubble. Competition judge Keith Wilson was particularly impressed. “At first glance, this is a puzzling picture that enthralls with its mystery,” he said. “Nothing is obvious here. And yet, like all good stories, it pulls you in, frame by colorful frame, until the reality unfolds and you are left in a state of wonder at the simplicity of it all.”

The photo above which won the second place in the Manmade category was taken at small dumping ground of old metal, where over the years the material has rusted, worn away, changed color creating new patterns and textures.

The Micro category amazed and delighted, with subjects ranging from lettuce leaves to callus-removing substances. Electrician Andrei Savitsky fought off stiff competition with his image of a glass worm, taken with a smartphone.

“‘Glass worms can vary in length from about half an inch to two inches,” he said. “On the right side of this particular image, you can see the large tracheal bubbles that serve as hydrostatic organs (or swim bladders). These bubbles allow the larvae to keep its horizontal position in the water column, while also helping to regulate the depth of its immersion. The bubbles are covered with dark pigment cells that can resize – if the cells expand due to absorption of light, the tracheal bubbles heat up and increase in volume, reducing the weight of the larvae and causing it to float up.”

‘Callus remover is one of my favorite substances for crystallization,” Marek Mis explained. “In this photo, the crystals had formed into structures that reminded me of a Native American village with tents pitched all over the hills.”

“When I first saw a cuckoo wasp last year, I just knew that this kind of wasp would be the perfect subject for an insect image,” said Jan Rosenboom. “Their colors are amazing, even with the naked eye, and yet so few people know they exist. My goal is to share my fascination with the threatened insect world and hopefully convince people that they are not just important, but beautiful too.”

Young Close-up Photographer of the Year was won by Tamás Koncz-Bisztricz for his magical shot of a springtail in a meadow close to his home in Hungary. “One frosty winter’s morning,” he recalled, “I headed out to take some extreme macro shots at the surface of some frozen water that had pooled in the tracks left by a tractor. Crouching down, I spotted some yellow globular springtails which were feeding in the sun rays reflected from the ice.”

In a forest in Switzerland, when it was very cold and the snow covered almost everything. the young photographer was able to capture “the picture I had in mind of a great crested tit against a blurred white background to make the red eye of the bird stand out.”

‘I live in the middle of nature and every spring the flowers bloom, welcoming a multitude of insects – especially butterflies,” said young Emelin Dupieux. “Among the most frequent visitors are fritillaries. I often see them resting on the flowers of Armeria arenaria, and feeding on the nectar. I wanted to capture the beautiful synergy between insect and plant.”